Winners of the 4th Annual War of Awards 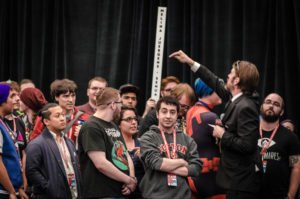 This year at PAX East, Boston was home to the 4th Annual War of Awards. The epic awards showdown takes its nominees from the winners of the major game award programs throughout the year and has attendees attesting or chaotically fumbling through their merits and voting for their favorites in an “Iowa caucus” live debate format.

At the 2018 show, Hellblade: Senua’s Sacrifice saw multiple award wins with both the Character/Performer and New IP/Debut categories, while The Legend of Zelda: Breath of the Wild took the top spot with their Game of the Year win.

During the debate, close calls and upsets kept attendees excited and pondering hard decisions based on the passion or charisma of the volunteer game representatives. Uurnog Uurnlimited saw a surprising amount of support from attendees, upsetting some major contenders in the “Audio” category. Baba is You saw growing support throughout its very competitive category and was able to clinch a “Design” win. There was some strong contention between Persona 5 and Horizon Zero Dawn in the “Narrative” category, as well as large support for both Hellblade: Senua’s Sacrifice and PLAYERUNKNOWN’S BATTLEGROUNDS coming out of the New/IP Debut list.

All awards, titles, organizations, characters, likenesses, and indictia are copyrights or trademarks of their respective owners and are unaffiliated.

Get the Latest Award Buzz